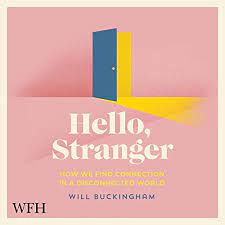 When I was reading the first chapter of Will Buckingham’s book (released in July 2021), I picked up a couple of texts, one by one, that helped me with meaning-making. This is something I suppose many readers do, when untangling the puzzle of an unfamiliar mind. We need known books to sit side-by-side, with the strangeness. Because I only got my hands on a copy a couple of hours ago, I am still reading Hello, Stranger – I will have finished it by tomorrow, ahead of an interview with the author.

I bought it after I saw a friend, Corey, recommend it on social media. He had been taught by Will at De Montfort University. As soon as I had finished the first chapter, I knew that I could not give it a brief review in a local newspaper. I decided to feature an entire essay on this website, as well, because new thoughts broke out about strangeness, the uncanny, and the Other – along with associations with other texts. I do not have a large readership, either in local news or on this blog. However, it is my understanding that the best of books really are passed around the general public, through people like me, through loyal word-of-mouth. So I pass this book from Corey, through me, to you.

The first book that seemed to bridge meanings with Will Buckingham’s was Proust’s Swann’s Way, and the reason for this was because of Buckingham’s sentence ‘Loss makes the future impossible, because it refers only to the past.’ This idea of an ending was juxtaposed with ‘loss tears a hole in the world,’ forming ideas of newness, of making space, and recreation.

Memories of Will’s flip between the past and present, just like Proust. Both writers may be reconciling loss with all that remains.

Proust remarked, on an artefact, but perhaps also on memory: ‘the beauty of a ruin which endures for all time.’ This is supposedly a description of Hubert Robert’s paintings of Paris, of the villas and gardens at moonlight. But knowing Proust, it also described his ceaseless determination to preserve memories.

Buckingham weaves memories of his house, which ‘breathed’ with the footsteps of unfamiliar guests, amongst recollections of strangers. One unfamiliar person in the street is raising money for a particular charity. Here – and I implore you to read the book, to understand the complexity of this moment, because I feel I will not do it justice – the stranger embraces him.

I have been trying to find the right sentence to describe this particular moment for a few minutes, but I can’t. You might not know why that is, but I have an inkling. Many of us who have experienced life-shattering grief experience a block. It is too much to define. It is hopeless to try. There was a time I could not sit in a seminar taught by Nicholas Royle, as it unexpectedly centred around death, one day.

He refers to George Simmel, who wrote that the stranger is both ‘nearby and remote’, which leads me onto another association.

Because most of us humanities students can’t talk about binaries without a certain French philosopher, I was reminded of Derrida – not only because of both philosophers’ interest in dichotomy.

Derrida also wrote that the law of decision is of ‘absolute urgency’. It is a ‘moment of non-knowledge’, as Nicholas Royle wrote. It is a ‘mad instant’ we make with ‘imperceptible suspense’.

On the topic of strangers, as Buckingham notes, we make quick instinctive decisions – to retreat, or trust – which are often clouded by past memories, biases, or even just a feeling. Is from a similar impulse that Helene Cixous describes? It could overtake us when we fall in love – we ‘flee, or succumb’, in Cixous’ words. When we meet strangers and form opinions about them, are we at the mercy of something called grace?

Returning to Hello Stranger, Buckingham describes that often, people subconsciously decide whether the stranger is the ‘angel or devil’.

A link between Buckingham’s theories and Dante’s Divine Comedy seemed clear, all of a sudden. The poet, in political exile from his beloved Florence, goes into black-and-white, rigid thinking. Dante relied very much on moral compasses of the Italian Renaissance, steeped in medieval texts. He used this guidance to split people up, into their place of ‘belonging’. Simply put, do they have a place in Heaven, or in Hell? Perhaps because he is in a state of permanent unease, surrounded by a place he was not born into, he casts much of the ‘Other’, and parts of himself, into darkness. It could be said that he identifies most with those who guide him to Heaven – such as Beatrice, who he met before his political exile.

As Dante associated Florence with Beatrice, is this epic poem a result of some double-bound longing? A grief for two losses, of home and love?

Buckingham wrote about the ‘subtle dance of ritual’ when entering stranger’s homes, but also, of the opposite: them exchanging your traditions, in your own home. Often, meeting up with many loved ones at once occurs in the aftermath of great trauma, when we are reminded to ‘reach out’ and connect.

Just as many remarkable texts give way to others, Buckingham’s book reminded me of Donna Tartt’s masterpiece The Goldfinch, which is about many subjects, but mostly, the complexities of grief.

If we read it from a Freudian point of view, the lost love-object is Theo’s mother. She represents the cultivated art world. After she passes away, her son transfers the love of his mother onto the Dutch Renaissance painting The Goldfinch, which he cannot bear to part with. Additionally, he is repeatedly drawn back to his ‘morphine lollipop’ of pain and healing, Pippa. She is the girl he met on the day of his mum’s death.

Because of the ‘sheer emotional force of home’, as Buckingham describes it, the loss of it becomes a kind of ‘paralysis’. Theo is paralysed in a repetition of being drawn back to Pippa and the painting, over and over.

Buckingham writes the following about grief: ‘I was waiting to see what it did to me, how it would remake me.’ There seems to be a concentration on becoming, not being. Perhaps this is similar to the act of writing itself, which authors use to ‘become’. Meaning is made. Their minds expand and involve with new information. And sometimes, those snippets of new information come from strangers, in the form of a book.

You can purchase this remarkably written book from Granta here.